LOL, guess what I typed into google images….

It can be downloaded from this site or viewed online via You Tube:
http://www.youtube.com/watch?v=LkOvoD-y0vQ

An intriguing concept, but I don’t think that the immolation of heretical clerics provides the answer to our future energy needs.

A Power Grid for the Hydrogen Economy

Cryogenic, superconducting conduits could be connected into a “SuperGrid” that would simultaneously deliver electrical power and hydrogen fuel

From the page:
“It is not at all clear, moreover, how well today’s infrastructure could support the rapid adoption of hybrid vehicles that draw on electricity or hydrogen for part of their power. And because the power system must continuously match electricity consumption with generation, it cannot easily accept a large increase in the unpredictable and intermittent power produced from renewable wind, ocean and solar resources.

We are part of a growing group of engineers and physicists who have begun developing designs for a new energy delivery system we call the Continental SuperGrid. We envision the SuperGrid evolving gradually alongside the current grid, strengthening its capacity and reliability. Over the course of decades, the SuperGrid would put in place the means to generate and deliver not only plentiful, reliable, inexpensive and “clean” electricity but also hydrogen for energy storage and personal transportation.”

It’s about time we got the Hydrogen Economy going in earnest, once we do we can let the Middle East sort out it’s own problems.

“Description
A fish that appears like a bishop. This idea may be based on the belief that everything on land has a corresponding creature in the sea, or may have been a fitting description for an unfamiliar creature that was caught. Also called a Bishop Fish.

Might be… a giant squid. Squids have heads shaped like a bishop, and it is not uncommon for them to be the size of a man. see: http://unmuseum.mus.pa.us/squid.htm

Described By: One such creature was seen of the coast of Poland in 1531.

In a reported Medieval legend, a Sea Bishop was captured alive in a fishing net in the 13th century. When it was brought to the king, the Sea Bishop begged to be set free. It was brought back to the sea, and before diving into the water it made the sign of the cross.”

Another informative piece that should be read together with this:
http://www.snopes.com/science/volcano.asp

…and this is the Baby-Eating Bishop of Bath & Wells
http://en.wikipedia.org/wiki/List_of_Blackadder_episodes

Informative answers to the questions:

“Where do the Katyusha missiles used to attack Israel come from?

What exactly is a Qassam rocket?”

The Home Office, twinned with Mordor.

From the Register…”The Home Office wants to issue control orders to businesses as well as individuals. An ASBO for businesses is the central proposal of a parliamentary Green Paper from the Home Office published this week.

Struan Robertson, editor of http://www.out-law.com/ the IT and e-commerce legal site for Pinsent Masons, said: “The Government has a challenge on its hands to write a law that balances its proposal to punish people and organisations for crimes that it cannot prove with the safeguards in the European Convention of Human Rights, notably the right to a fair trial.”

Back by popular demand…

Paving stones and tinned fish look set to play a significant part in your life next Saturday afternoon. That would be the effect of Pluto, the planet of patio redesign, entering Capricorn, the sign of cat food.

The Stumbleupon groups that I moderate, namely:

have been getting off-topic postings or … from persons who are probably…

In the immortal words of the Cybermen…

Casanova, Oscar Wilde or Jeffrey Archer.
Which is the odd one out?

They all appeared at Bow Street Magistrates court which closes today, but only Casanova was let off. Syd Barrett, the troubled founding member of Pink Floyd, has died aged 60, after living the life of a recluse for the last 30 years.

A source close to the band, who did not want to be named, said Barrett died on Friday. Media reports say complications from diabetes were the cause.

Barrett’s bizarre on-stage antics in the late 1960s were linked to his experimentation with psychedelic drugs, and he left the band in 1968.

The singer, songwriter and guitarist, who wrote the bulk of Pink Floyd’s earliest music, has been credited with helping shape its progressive sound and influencing artists including David Bowie.

He wrote most of the songs on Pink Floyd’s first album “The Piper at the Gates of Dawn”, which was a hit in Britain, and also worked on “A Saucerful of Secrets”, released in 1968.

Barrett issued his first solo album, “The Madcap Laughs”, in 1970, with backing from members of Pink Floyd and Soft Machine, but his involvement in music had ended by the mid-1970s and he has lived the life of a recluse ever since.

The Book of Revelations, irreverantly portrayed in the style of a comic graphic novel. Informative if you like Christian eschatology, but as a previous reviewer wrote “likely to offend the spiritually reverent.” 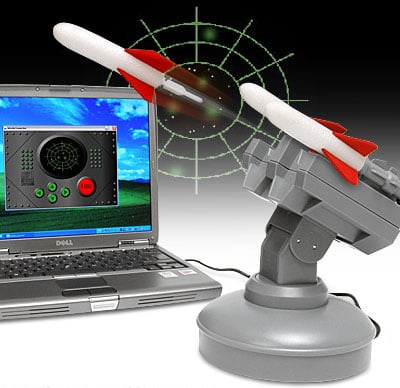 “The desktop deployment system comes pre-loaded with three foam rockets ready to be triggered by punching a virtual version of the infamous red button. You control the direction and angle of attack with your mouse.

Unless they get you first.”

“Neuromancer
This was done for the Phantasia Press edition of William Gibson’s classic novel. The cyberspace reflected in the store window integrates itself into the anarchistic street scene.”

A updated version of this game with the Havoc Physics Engine:
http://en.wikipedia.org/wiki/Havok_%28software%29
now that would be awesome. We can still dream…