A treasure trove of old school books lovingly scanned and transcribed. The handwriting is superb and the insights fascinating.

“There are two fairy forts situated in my district. One is about a quarter of a mile from my house in a village known as Cloonarrow while the other is about three hundred yards east of my house.
The fairy fort situated about a quarter of a mile is of circular shape and is surrounded by trees. Fairies are supposed to abide in it and are said to appear after twelve o’clock a.m. In front of this fort a house was situated but now the owner of the house and of
the land in which the fort is situated is dead and the house has collapsed. There is no entrance hole to it.
The other fort situated a very short distance from my house is a circular little hill surrounded by trees. Neither is there an entrance hole to this fort. It is said that a woman dressed in white appeared to a man at this fort and accompanied him to a place known as the “Crooked Bush” where she disappeared.
Nobody ever dreams of tilling the land in which the forts are, neither do they cut the trees as it is said that anybody who touches those trees is sure to be unlucky.”

Using freely available online resources and my local knowledge I’m pretty sure this is the location of the Fairy Fort 300 yards East of the author’s home:

Fairy Forts are typically, but not exclusively circular archaeological sites. Often tumuli or hill forts, there are over 30,000 of them in Ireland.

The MV Plassey started its life as HMS Juliet, a naval trawler in the Royal Navy built at the beginning of WWII. during the war she took part in Operation Torch in 1942 and in the Mediterranean theatre. After the war she was converted into a merchant ship and sold to the British merchant service as the Peterjon. Later, in 1951 she was acquired by the Limerick Steamship Company and her name changed yet again to the MV Plassey (sometimes written as Plassy).

She operated around the coast of Ireland until 1960 when she was caught in a severe storm and ran aground on Finnis Rock, Inisheer, Aran Islands whilst carrying whiskey, stained glass and yarn. Luckily, the entire crew was saved. Two weeks later, a second storm washed her off the rock and drove her up the beach.

The Plassey is probably most famous for appearing in the opening credits of the TV comedy Father Ted.

The Cliffs of Moher in County Clare attrac up to 1.5 million tourists a year.

Rising to a height of 214 meters they stretch for 14 kilometres. They are made up of sandstone and shale formin distinctive layers as can be seen in the photo.

The award winning visitor centre is dug into the hillside so it doesn’t detract from the scenery.

This photograph was taken in July 2019. 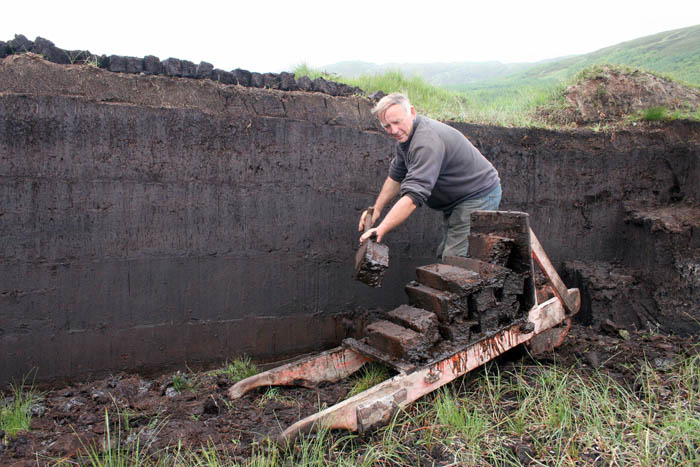 My grandfather cut more turf in a day
Than any other man on Toner’s bog.
Once I carried him milk in a bottle
Corked sloppily with paper. He straightened up
To drink it, then fell to right away

Nicking and slicing neatly, heaving sods
Over his shoulder, going down and down
For the good turf. Digging.

The cold smell of potato mould, the squelch and slap
Of soggy peat, the curt cuts of an edge
Through living roots awaken in my head.
But I’ve no spade to follow men like them.

Between my finger and my thumb
The squat pen rests.
I’ll dig with it.